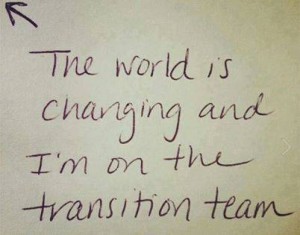 The ones still in protection mode of the old (problems created from the old psyche) will drag the old into the new and that’s an abusive act done to the new awareness which is back on Earth already, that’s hijacking and occupying Source again! And walking in circles around Source again. At the edge of Source its very busy. So many are not taking the last step into their own Source.

We are on the Transition Team: we really are. We are done with the old. We are not in protection mode to the old systems and structures and peoples mind set from the old.

We can pick up people’s old mindset from the new and point out where they are coming from the old and not from the new. When people are not touchable they will perceive this as arguing or debating or competing.

Yes in the reality of the now, in the transition we are in, we need old money to survive: that’s why We embed the Transition.

All politicians are ‘only one human being’ and you will recognize if they are standing for the new and speaking from the new awareness or the old. One politician standing for the new and speaking from the new embeds the Transition and IS living together with his/her fellow man. Only then this (wo)man will be on the Transition Team also and is contributing to the transition we are in. Election and winning the election putting in front of a true living togetherness is from the old. He has to live together in the HERE NOW. Then he is on the Transition Team and open to receive the new awareness fully. The transitional steps are here too already.

Its about the governor himself! It about yourself! So it has nothing to do with elite manipulating the election. The governor IS speaking from the new all way long from the beginning already. The governor is working with a team and has people supporting and co creating with him: they all should stand for their free life entrance and embed the Transition and they should contribute to each others life entrance. Then they are on the Transition Team and walking their talk. Only then they are speaking ‘new’.

No this crowd s/he is co creating with, would truly live together and co-create what they want to co-create.

This goes for all movements, projects, interviewers, speakers, etc..

Everybody who does not want to be a sleepwalker anymore, and is not in protection mode for the old… is invited to connect and share with me and to truly live together with me…